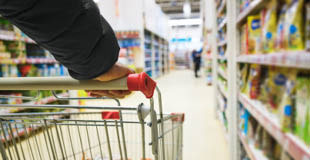 Raise your voice! Send a message to the retailers who earned an F to protect their customers!
Take Action

How does Ahold Delhaize compare to its competitors?

= Excellent
= Some action
= No action

Ahold Delhaize publicly described its safer chemicals policy for its stores in the United States, which the retailer refers to as its “Sustainable Chemistry Commitment,” in a September 2019 press statement. The policy applies to both products and packaging for all of Ahold’s private-label products, including grocery, baby food, infant formula, formulated laundry, home and personal care, cosmetic, and baby products. The retailer announced that for these products, it created a beyond restricted substance list (BRSL) that it refers to as its “Chemicals of High Priority List.” Suppliers will be required to replace chemicals on the list with “more sustainable substitutes.” The BRSL is not publicly available, but in a press release announcing the policy, Ahold Delhaize stated it includes “per- and polyfluoroalkyl substances (PFAS), Bisphenol A (BPAs), [and] Phthalates.” The retailer additionally confirmed to us that all bisphenols, not just BPA, are included. Given that several of these chemicals are specifically linked to food packaging and the policy specifically states it applies to packaging, we award credit for Ahold Delhaize having a BRSL for packaging.

The retailer has noted as part of its efforts to reduce plastic waste that, “…we will ensure all plastic packaging is free of hazardous chemicals.” In a separate disclosure to the Ellen MacArthur Foundation’s “New Plastics Economy Global Commitment,” Ahold Delhaize adds specificity to its plastics pledge by saying it will eliminate 100% of its use of polystyrene (PS), expanded polystyrene (EPS), polyvinyl chloride (PVC), and polyvinylidene chloride (PVDC) in packaging by 2025. All of these are plastics of environmental health concern (PEHC). The retailer earns credit for this quantifiable goal and for having a beyond restricted material list (BRML), although it is unclear if this applies only to private-label products or all products sold by the retailer.

Ahold Delhaize does not apply the policy to its operations or to all locations, and does not have a publicly available manufacturing restricted substance list (MRSL). It is unclear if the company’s policy applies to beauty products of environmental justice concern (BPEJC).

5 out of 5 points
Explanation of Points

The retailer indicated to us that the managers within its private brands department are responsible for monitoring vendors’ compliance with the company’s beyond restricted substance list (BRSL).

Ahold Delhaize states that it ties compensation to sustainability metrics, including its safer chemicals policy.

Ahold Delhaize’s policy notes that “beginning in 2020,” it will be “expanding supplier product testing requirements.” It is unclear if the retailer is referring to testing to be performed by suppliers using third parties or its own testing, but we have awarded half credit for this initiative. Ahold Delhaize additionally confirmed to us that it has “trained various private brand suppliers on priority class chemicals of concern,” for which we also award points. The retailer’s policy is silent on contractual requirements.

Ahold Delhaize has not disclosed that it incorporates its safer chemicals policy, BRSL, or BRML in supplier contracts.

0 out of 17.5 points
Explanation of Points

Ahold Delhaize has not taken any discernible action on suppliers disclosing ingredients to the retailer going beyond regulatory compliance.

5 out of 26 points
Explanation of Points

Ahold Delhaize publicly documented that in 2019, it switched from expanded polystyrene (EPS), which is a plastic of environmental health concern (PEHC), to polyethylene terephthalate (PET) for its “Nature Promise chicken trays” in the United States, resulting in a reduction of 90 metric tonnes of EPS. We have awarded partial credit for action in this minor packaging category as well partial extra credit for disclosing the substitute.

2 out of 16 points
Explanation of Points

Ahold Delhaize’s policy specifically calls for replacing restricted substances with “more sustainable substitutes,” but the retailer does not provide clear guidance or a process to determine what is “more sustainable” or safer.

2.5 out of 20 points
Explanation of Points

Ahold Delhaize’s statement on its safer chemicals policy notes that it is “expanding product ingredient information provided to consumers, beyond what is required by law,” but the retailer has provided no specific detail on what this means or if it meets any of our criteria for transparency.

In its statement on its safer chemicals policy, the retailer wrote “Beginning in 2020, Ahold Delhaize USA and its companies will participate in The Chemical Footprint Project, reporting annually on progress toward the commitment.” Ahold Delhaize did in fact participate in the CFP for a portion of its product portfolio in 2020 and credit is awarded accordingly.

0 out of 8.5 points
Explanation of Points

2.5 out of 5 points
Explanation of Points

3 out of 10 points
Explanation of Points

Ahold Delhaize participated in the Chemical Footprint Project survey for a portion of its product portfolio in 2020.

0 out of 5 points
Explanation of Points

In connection with the announcement of its safer chemicals policy, Ahold Delhaize noted to us: “We work with stakeholders that share a mission to advance the possibilities of greener chemistry.” However, it is unclear if the retailer actively participates in a collaborative process that meets our criteria, retains an independent expert body to promote safer chemicals, or has created an external advisory board to provide input on implementation of the policy.

0 out of 5 points
Explanation of Points

There is no indication that the retailer invests significant financial resources into independent research into safer alternatives to chemicals of high concern (CHCs) and/or green chemistry solutions.

Raise your voice! Send a message to the retailers who earned an F to protect their customers!
Take Action